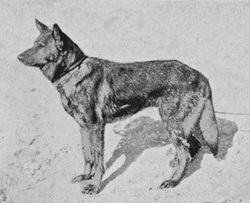 "Horrand embodied for the enthusiasts of that time the fulfillment of their fondest dreams. He was big for that period, between 24" and 24 1/2", even for the present day a good medium size, with powerful frame, beautiful lines, and a nobly formed head. Clean and sinewy in build, the entire dog was one live wire. His character was on a par with his exterior qualities; marvelous in his obedient fidelity to his master, and above all else, the straight forward nature of a gentleman with a boundless zest for living. Although untrained in puppy hood, nevertheless obedient to the slightest nod when at this master's side; but when left to himself, the maddest rascal, the wildest ruffian and incorrigible provoker of strife. Never idle, always on the go; well disposed to harmless people, but no cringer, mad about children and always in love. What could not have been the accomplishments of such a dog if we, at that time, had only had military or police service training? His faults were the failings of his upbringing, never of his stock. He suffered from a superfluity of unemployed energy, for he was in Heaven when someone was occupied with him and was then the most tractable of dog."
~Captain von Stephanitz
Originator of the breed

Some More Amazing Dogs in the History 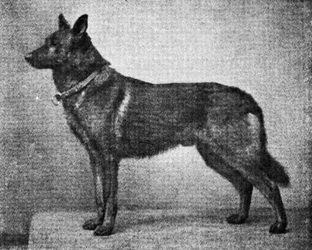 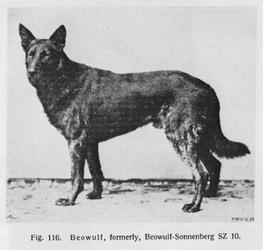 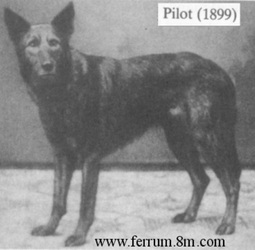 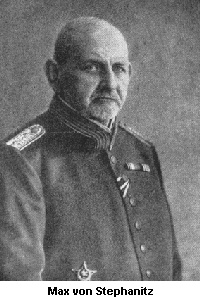 The German Shepherd dog breed has its origin in the late 1800s when Max von Stephanitz from Germany began developing a breed that would later become the dog we know today as the German Shepherd.Von Stephanitz desired to produce a dog breed that could be utilized as an all-around working dog. Developed from various farm and herding dogs of his time, von Stephanitz's original German Shepherd was derived from a herding dog he acquired in 1899, and he and his friend Artur Meyer formed the Verein fur Deutsche Schaferhunde which was the first club in the German Shepherd dog breed history. This club and von Stephanitz kept tight control over the breed until his death in 1936. He determined which dogs would be used to breed based on how well they did in various shows and trials that were the precursor to the Schutzhund tests still performed today. His main criteria for judging a dog's success were both its usefulness coupled with its intelligence. Von Stephanitz also promoted the utility of the breed to the German government for work in both the police and the military as well as other all-purpose uses as a working dog breed. Following the creation of the German Shepherd breed by von Stephanitz in the early 1900s, the breed's popularity soon soared and became one of Germany's most popular dogs. Serving in both World War I and II, the German Shepherd was a favorite military dog, primarily in Germany, but American and British soldiers were also impressed by the breed and brought the dog home following both wars. In fact, one of the most popular German Shepherds dogs was Rin Tin Tin, originally from France, and brought to America by an American GI following the first world war. Rin Tin Tin went on to make 26 movies until his death in 1932 and contributed to the breed's enormous popularity. In addition to its use in the police and military arenas, German Shepherds have a history of usefulness in other areas, is known as a successful show dog and has been a popular family pet. German Shepherds were the first dogs used as seeing eye dogs in the late 1920s and Helen Keller, an avid dog lover, owned a couple of German Shepherds.


The German Shepherd Dog is respected and admired throughout the world for its versatility, intelligence, and loyalty. It has existed as a recognized breed for a relatively brief period of time compared to other dog breeds. The early shepherd dogs of Germany were of several types suited to their environments. Coat length and texture, color, and build all varied but these types all possessed ruggedness, intelligence, soundness, and the ability to do specialized work. With advances in transportation and communication came the forming of societies of herders and the first trends toward selective breeding of herding dogs, record keeping, and a gradual trend toward one type of dog which could work equally well under all conditions. In 1881, the first formal club, the "Phylax" society was formed but lasted only about three years. In 1889 Captain Max von Stephanitz began the standardization of the breed. It all started at a dog show in Karlsruhe in western Germany. A medium-sized yellow-and-gray wolflike dog caught his attention. The dog was of the primal canine type, supple and powerful, and possessed endurance, steadiness, and intelligence. He was a working sheepherder, born with this ability, requiring no training other than direction and finish to become proficient at the task. This dog, Hektor Linksrhein, was purchased by von Stephanitz, renamed Horand von Grafrath, and became the first registered German Shepherd Dog. Von Stephanitz founded the Verein für Deutsche Sch·ferhunde, SV (German Shepherd Dog Club), becoming the first president, and in a short period of time achieved the standardization of form and type in the breed. A standard was developed based on mental stability and utility. The captain's motto was "Utility and intelligence". To him beauty was secondary, and a dog was worthless if it lacked the intelligence, temperament, and structural efficiency that would make it a good servant of man. A breed standard was developed as a blueprint dictating the exact function and relationship of every aspect of structure, gait, and inherent attitude. Von Stephanitz inbred heavily on Horand and also Luchs, his brother, to consolidate the bloodline. Horand's best son, Hektor von Schwaben, the second German Sieger, was mated with his half-sister as well as through daughters of his own sons, Beowulf, Heinz von Starkenberg, and Pilot III.  Intense inbreeding also concentrated undesirable recessive originating from the mixing of the original strains. Von Stephanitz then inserted unrelated blood of herding origin through Audifax von Grafrath and Adalo von Grafrath. As Germany became increasingly industrialized and the pastoral era declined, von Stephanitz realized the breed might also decline. With the co-operation of police and working dog clubs a set of specific tests was developed in tracking, formal obedience, and protection work. This was the prototype of the present Schutzhund trials. He persuaded the authorities to utilize the German shepherd dog in various branches of government service. The dog served during the war as Red Cross dogs, messenger dogs, supply carriers, sentinel, tracking and guard dogs. 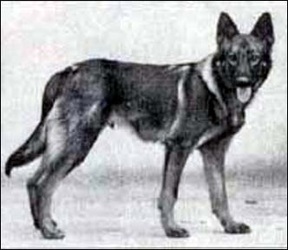 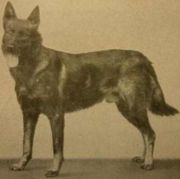 All of the dogs we have here at Hollenhund can be traced back to these magnificent dogs. Feel free to wander through the pedigrees of any dog on this site and see all of the prominent dogs in their lineage more recently including Tina Jipo Me, Navar Hronovsky Pramen,  2 x WORLD SCH champ G Tom Van't Leefdaalhof, V Fero vom Zeuterner Himmelreich,  ﻿2 X VA1 Quando von Arminius﻿, Hard Policia and many other amazing dogs.
google breeders